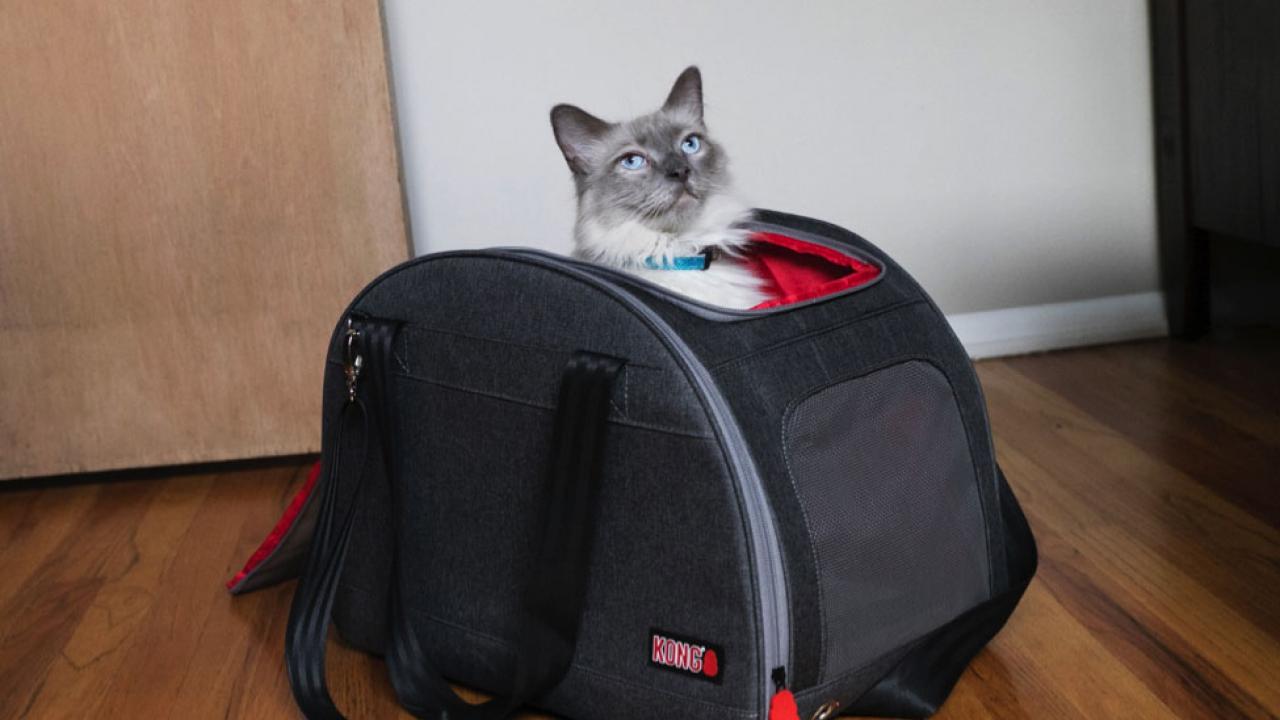 In my previous blog I discussed some common cat behavioral challenges and their solutions, while hopefully debunking the myth that cats can’t be trained. Having been in the training world for over 3 decades and being somewhat of a skeptical soul in my own right I understand that not everyone reading the last blog was entirely convinced. Hopefully after reading and trying this one, you will be.

My last blog touched on litter box challenges and scratching on furniture. This blog will address how to teach cats to tolerate and even like their traveling crates (AKA carriers).

Learning to tolerate going in a traveling crate. This one is an interesting and important skill. Depending on which study you read, did you know that dog owners take their dogs to the veterinarian 25-40% more than cat owners? I’ve been hearing variations of this for years and for the longest time wondered why. One explanation is that cats or least some kitties are a little less obvious about being sick then dogs. The last time my Basset Hound was sick she waited until I entered the room before starting the most pathetic groans. She was too weak to get out of her bed until she realized she might get a treat at which point her recovery was nothing short of miraculous. While not every dog is as demonstrable as mine was, nor every cat a stoic loner, there might be something to this explanation. 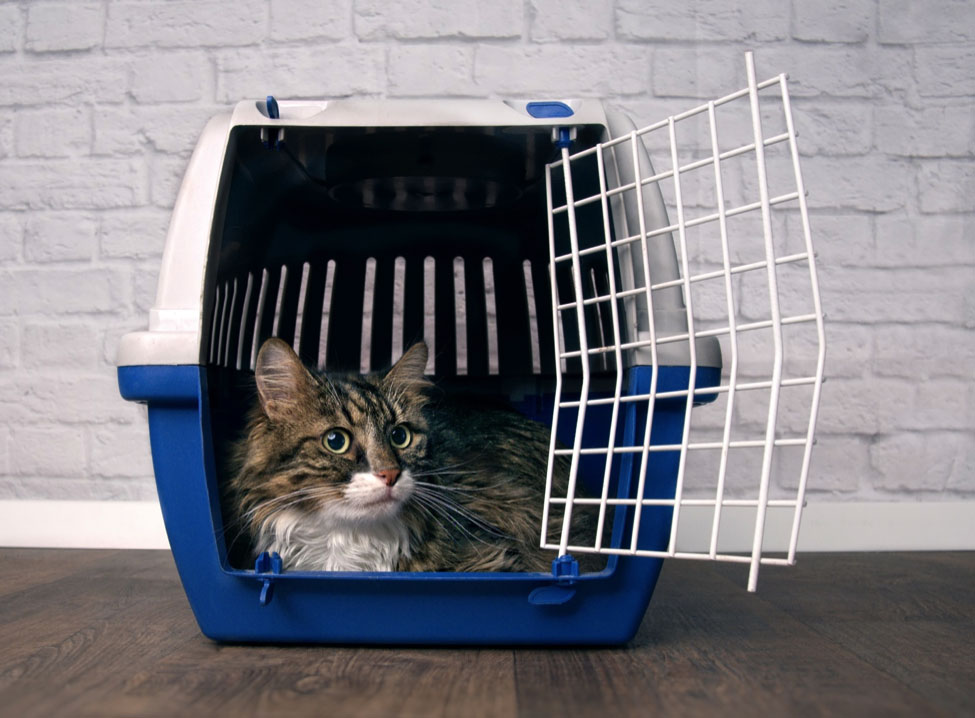 However, in my view this doesn’t account for why so many cat owners don’t get their pets to the veterinarian. One issue that may account for a good deal of the difference is ease of transport. While not every dog will eagerly go to the doctor, for most it’s a matter of putting them on a leash and taking them to the veterinarian. Cats are a different matter. Transporting them means putting them in a carrier which is where the fun begins. Ever try it with a cat that doesn’t like the carrier? The funny sounding phrase “herding cats” becomes far less humorous. Some people find it so difficult that barring an absolute emergency, they simply don’t try. Basic things like routine veterinary check ups become major ordeals and are skipped which is a viable reason why cat owners don’t get their best friends to the doctor as much as dog owners. Yet and here is the good news, it is absolutely possible to teach a cat to tolerate or even like...well tolerate their carrier.

It’s all association. Stop and think about it. Cats weren’t born not liking carriers. Cats won’t have an opinion about a crate one way or the other until they learn to do so. Most cats are picked up and put in a strange funny smelling box at which point they are whisked away to a frightening place where strangers reach in, grab them and do all sorts of scary and possibly uncomfortable things to them. Look at it this way. If the first 15 times you rode in an automobile you were grabbed, tossed in and at the end of the trip pulled out, pinched, prodded and given an inoculation, how eager would you be to ride in a car? Welcome to kitty’s world. Right now, your cat probably has a very negative view of their carrier. This is the first thing we need to change. So, as the saying goes, the first step is awareness.

Changing the association. Make sure the crate is the correct size. It should be large enough for the cat to stand, turn and comfortably lie in. Some folks have carriers that are so small they practically have to stuff their cats into them. Don’t be that person. Comfort is a key. Once you have the correct size, put it in a quiet area the cat likes and leave the crate door open. Add nice inviting towels or some other soft bedding material. Let her see you placing delectable treats in the crate. Don’t try to force her into the carrier, let her believe this is all her idea. If you see her go in, praise her but otherwise don’t worry as her getting the treats will be a reward as well. If your cat is toy motivated put a favorite toy in the crate. Do this for several weeks without using the crate for anything else (if possible). Over time many people will see their cats actually starting to go into the carriers with no hesitation on their own. Patience is a key here. Depending on the age of the cat and how many negative experiences they’ve had with a crate it could take several months for the cat to start going in the carrier on their own and several months after that for them to be comfortable in it. If you aren’t making any progress after 4-8 weeks you can try Feliway which works for many cats. Pheromones really can work to help cats feel less anxious but please remember this is not a magic cure all spray. Catnip might also help in attracting some cats to the crate. So now you have a cat that is comfortable going into their crate on their own. Now what? 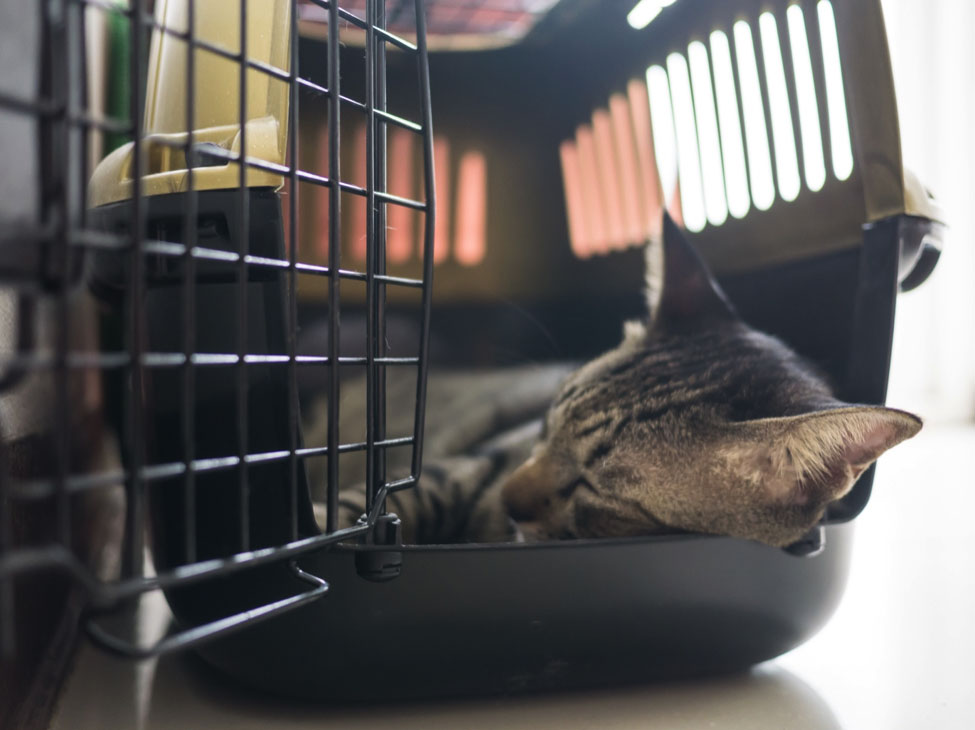 Teaching the cat to go to the carrier. Once the cat is comfortable entering the crate on her own, you can start to teach her to do this on cue. Take her favorite treat or toy and let her see you have it. Walk up to the carrier and place the item inside. Stand back and let the cat enter to get it. As she does, say the cue “crate” or “enter” or “saddle up” or anything else you want. Only give this cue while she is entering the crate. That’s one repetition. Do 5-10 per day five-six days a week. If she gets bored of one favorite treat, use another. Use toys for non-food motivated cats. After 4-6 weeks most cats will zip right over to the carrier and go inside for their pay off. When they do you are ready for step four.

Preliminary travel preparations. Your cat is now perfectly comfortable going in the crate on her own and will enter it to get a treat or toy from you. Next move is to close the door to the carrier. Just for a second or two. Most cats won’t care or notice. Do this for a few days. Next leave it closed a little longer. Maybe 20-60 seconds. Some cats will notice but most won’t react negatively. Make sure you praise during this time. If no problem here, you can start to add a little more time with the door closed working up to 2-3 minutes. You can also feed small treats through the mesh on the door of the crate. Again, the objective here is to make this as positive as possible. Once you reach the point where the cat is ok with door closed for 3-5 minutes, you can start moving the cage. This is best done very gently. Start just sliding it a few inches on the floor. Most cats will notice that but praise and feed. Do this a few times a day. In a few days you can move it a little further and gently pick it up. Gently! Using this approach most cat parents can get to a point where they can carry the crate with the cat inside around the house for a few minutes with no problems at all. Once you can do this without the cat being stressed you are ready for the next step. How do you know if the cat is stressed? They may vocalize or may start to hesitate going in the carrier. If this happens go back a step and work up again.

It’s a great big world out there. Congratulations, you have your cat comfortable and willing to go into the crate on your cue. What’s more she is ok with your closing the crate door and moving the carrier with her in it. I told you cats were trainable! Now the world beckons. Take the crate (with your precious cargo inside) and put it gently in your car. Sit for a minute or two and then take it back in the house. Do this 1-3 times a day. After a week or so, turn the motor on when the crate is the car. After a few times doing this, go for a short 2-5-minute drive. Try to keep to quiet streets and avoid sharp turns, sudden stops etc. When you get back home give her a super special treat. Try a few trips each week. You can gradually increase the time and distance at that point. Of course, eventually you are going to need to take her some place she might not like. However, if the association she now has with her carrier is positive and the vast majority of her travelling experiences in the crate are also positive it won’t matter all that much.

If you need help with this consider hiring a cat trainer. Yes, this is a thing!

Steven Appelbaum is a professional animal trainer with over 35 years of experience. He is the president and owner of Animal Behavior College the nation’s largest animal career school. He lives with his wife Shelley and new Basset Hound named Roy.